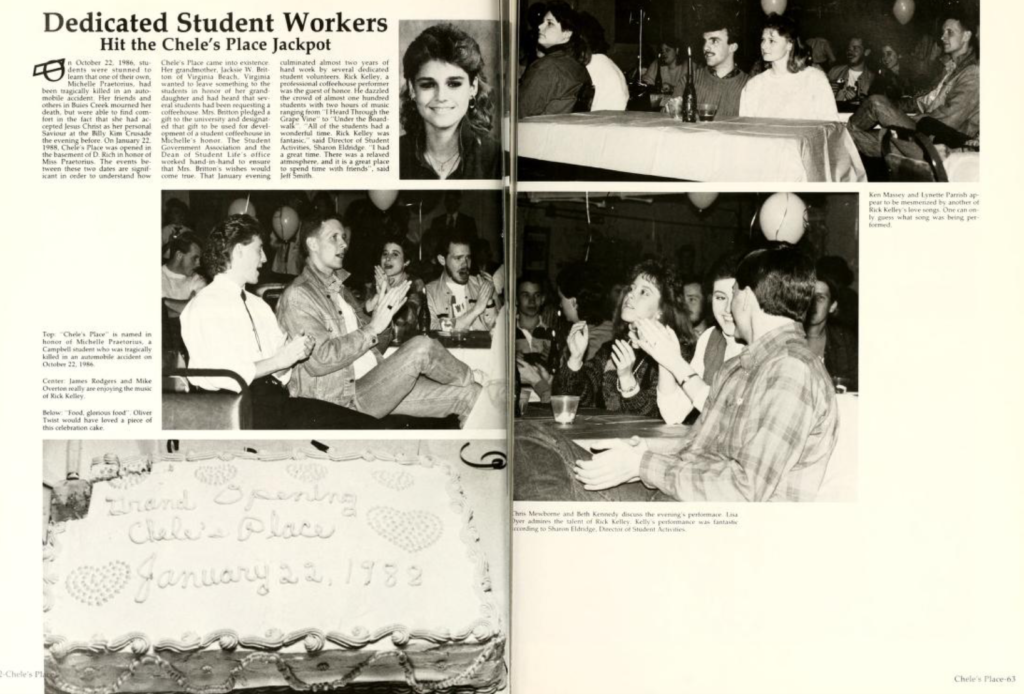 The basement of D. Rich used to be the hot spot for students to hang out between classes, where they could grab a cup of coffee and hang out with friends. While it no longer exists, the basement, known as Chele’s Place, was a student favorite. It opened on January 22, 1988, with live music for the grand opening. The Pine Burr yearbook describes how the coffee shop got its unusual name – the nickname of a student who passed away in a car accident two years previously.

“On October 22, 1968, students were stunned to learn that one of their own, Michelle Praetorius, had been tragically killed in an automobile accident. Her friends and other in Buies Creek mourned her death, but were able to find comfort in the fact that she had accepted Jesus Christ as her personal Savior at the Billy Kim Crusade the evening before. On January 22, 1988, Chele’s Place was opened in the basement of D. Rich in honor of Miss Praetorius.

The events between these two dates are significant in order to understand how Chele’s Place came into existence. Her grandmother, Jacksie W. Britton of Virginia Beach, Virginia, wanted to leave something to the students in honor of her granddaughter and had heard that several students had  been requesting a coffeehouse. Mrs. Britton pledged a gift to the university and designated that gift to be used for development of a student coffeehouse in Michelle’s honor. The Student Government Association and the Dean of Student Life’s office worked hand-in-hand to ensure that Mrs. Britton’s wishes would come true. That January evening culminated almost two years of hard work by several dedicated student volunteers.

Rick Kelley, a professional coffeehouse performer was the guest of honor. He dazzled the crowd of almost one hundred students with two hours of music ranging from “I Heard Through the Grapevine” to “Under the Boardwalk.” “All of the students had a wonderful time. Rick Kelley was fantastic,” said Director of Student Activities, Sharon Eldridge.

Chele’s Place is no longer open, but alumni will remember happy hours spent with friends in the D. Rich basement.