Campbell University has operated a location on the Fort Bragg installation since 1976. With over 96% of its student population being military affiliated, the Fort Bragg & Pope campus is a convenient site for active duty soldiers, veterans, and their family members. Alumna like Nicole Moore, who moved to North Carolina with her husband after she got out of the military in 2016. 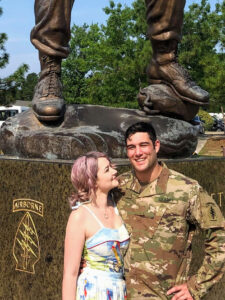 She was a student, as well as a veteran and a military spouse. She developed a deep camaraderie with her classmates that helped put her at ease in all three of her roles. “[The other students and I] started coming to class 20-30 minutes early just so we could catch up with each other,” Nicole says. “It was comforting for me to be in a military environment while going to school.”

Nicole’s ambitions were to become a therapist until she took statistics with psychology professor, Dr. Erin Moeser-Whittle. “We learned about test development, and I saw by running these simple algorithms you could do so much with just a little bit of information,” she says. “The more classes I took at Campbell, the more I knew my passion was research.”

Nicole shared her experiences in front of 150 classmates at the Adult & Online Education graduation ceremonies this past spring. Smaller class sizes at the Fort Bragg & Pope campus give students an advantage of truly getting to know their peers, as well as working one-on-one with the professors.

In addition to her education, Nicole found a lifelong mentor in Dr. Moeser-Whittle. The two are working on a research project focused on aspects of the military experience for service members and their families. “[Nicole] brings a unique background and experience to the classroom,” says Dr. Moeser-Whittle. “She is truly an outstanding student, who made every class she was in more enjoyable.”

Nicole hopes the experience will give her an advantage in graduate school at Okinawa International University where she will major in Social Welfare.