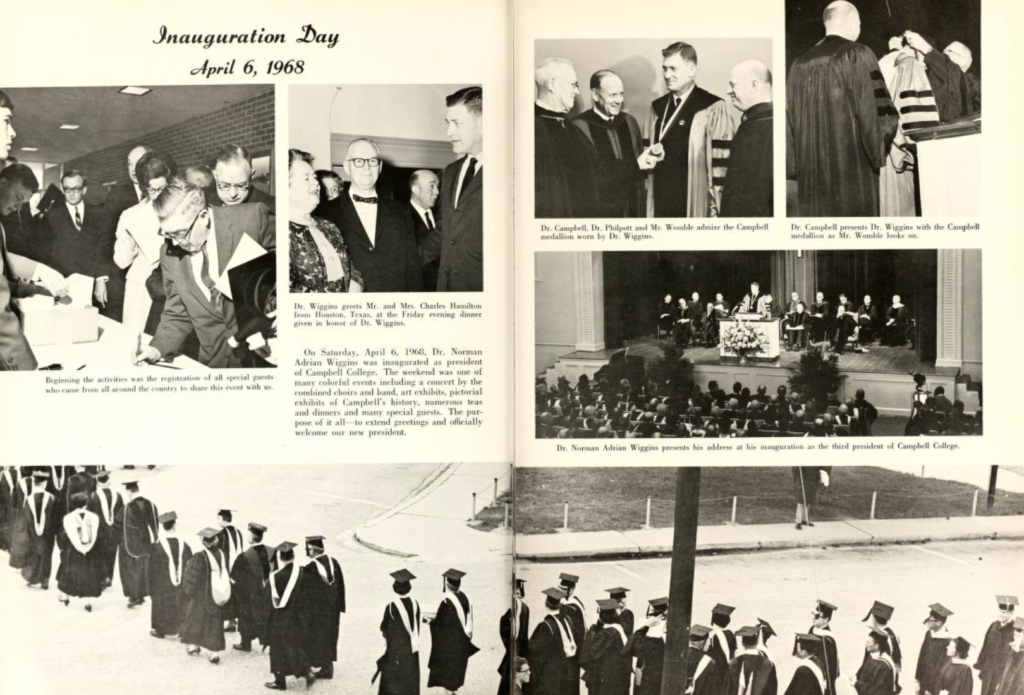 April 6, 1968 saw the inauguration of Campbell’s third president, Dr. Norman Adrian Wiggins. At the time, Campbell University was Campbell College; under Wiggins’ guidance it made the transition to a university. Dr. Wiggins served as Campbell’s president until 2003, after which he took on the role of Chancellor for the next four years.

The Pine Burr yearbook from 1969 commented on the day’s festivities, saying, “The weekend was one of many colorful events including a concert by the combined choirs and band, art exhibits, pictorial exhibits of Campbell’s history, numerous teas and dinners, and many special guests. The purpose of it all – to extend greetings and officially welcome our new president.”

Dr. Wiggins addressed the crowd of students, faculty, and friends of the college, and was presented with the Campbell medallion by previous president, Leslie Campbell, a symbolic passing of the torch. Wiggins had previously received his degree from Leslie Campbell in 1948 as an Campbell undergraduate.

As president, Dr. Wiggins saw the opening of the schools of law, pharmacy, education, business, and divinity. The Norman Adrian School of Law was the first law school opened in North Carolina in 35 years and the pharmacy school was the first school of pharmacy opened in the United States in 40 years, putting Campbell University on the map. Dr. Wiggins continued to be a friend of Campbell until his death in 2007.