John M. McCabe is the founder and president of The Law Offices of John M. McCabe P.A., located in his hometown of Cary, North Carolina. He began a one-year term as the 47th president of North Carolina Advocates for Justice (NCAJ) on July 1. A 1991 graduate of the University of North Carolina-Chapel Hill,  McCabe graduated, cum laude, from Campbell University School of Law in 1994. While in law school, he served as Articles Editor of the Campbell Law Review and was named to several national moot court teams. He is now a member of the law school’s Board of Visitors. Since 1995, McCabe has practiced as a plaintiff’s attorney, developing a statewide practice devoted largely to representing the victims of trucking and auto collisions, on-the-job accidents, animal attacks and nursing home neglect. McCabe is licensed to practice law in all North Carolina federal and state courts, and he devotes a considerable amount of his time to teaching legal concepts and advocacy skills to fellow attorneys and law students. He is also an active volunteer with the North Carolina Lawyers Assistance Program. McCabe has earned numerous recognitions, including: Tier 1 Best Law Firms and Top Lawyers in America by U.S. News & World Report; The Best Lawyers in America; North Carolina Super Lawyer (Top 100),  North Carolina’s Legal Elite, Best Lawyers in North Carolina and Top 100 Trial Lawyers. Active in NCAJ through his career, McCabe has served on the Executive Committee since 2014, and he has chaired the NCAJ’s Advocacy Strategic Plan Task Force, the Finance Committee and the Nominations & Awards Committee. He was also appointed to the Chief Justice’s COVID-19 Task Force.He previously chaired the Auto Torts Section and the New Lawyers Division, and in 2015, he received the NCAJ’s Ebbie Award for his dedication to the organization. He also authored, “The Analysis and Investigation of Personal Injury Cases,” in the book, “Personal Injury Practice in North Carolina.” In his spare time, he enjoys playing tennis, traveling and going to concerts with his wife, Rebecca.

Q: When did you know you wanted to be a lawyer?

A: “Since I was 8, I always wanted to be a lawyer. When I was 8 years old, my grandfather, whom I admired and adored, looked at me and said, ‘John, you should be a lawyer.’ Now, when most people hear that, their first thought is that I must have loved to argue as a child. But that wasn’t the case and that wasn’t why my grandfather encouraged me to be a lawyer. Now, my grandfather wasn’t a lawyer. He was a businessman. And we had no lawyers in our family. So, why did he want me to be a lawyer? He wanted me to be a lawyer because he knew the law was a noble profession. He knew that lawyers did tremendously important work – work that was important for people and their communities. He knew every-day, hard-working, salt-of-the-earth people needed lawyers to stand up and fight for them against the powerful, the influential and the well-funded.”*

Q: What does being a lawyer mean to you?

A: “Lawyers are the great equalizers. We level the playing field. We make people play by the rules. We demand accountability. Ever since I received my law license, I have cherished being a lawyer. It’s in my DNA – the work we do is too hard for the timid or the dispassionate. It requires tremendous commitment and dedication.”*

Q: As president of NCAJ, how do you define advocacy?

A: “Advocacy is action. It’s acting in support or defense of a cause. Advocacy is not passivity. We are not the North Carolina Passivists for Justices. Nor is advocacy sitting around and complaining that something is ‘unfair.’  We are not the North Carolina Complainers for Justice. We are the North Carolina Advocates for Justice. And that means we take action – we do something about it. Sometimes we act proactively, sometimes defensively. But we act strategically and realistically, not recklessly and quixotically. We act with courage to change the things that we can, recognizing that change occurs sometimes quickly, but more often slowly. For the things that cannot be changed right now, we accept that reality, but at the same time, we recognize that acceptance doesn’t mean resignation. It means figuring out how to alter the landscape so that change can eventually take place.”*

Q: One of your favorite sayings is, “Help is received, not given.” What do you mean by that?

A: “It means there are plenty of people who are willing to give help, but you also need people who are willing to ask for help. In NCAJ, for example, we ask each other for help, and the help comes in droves. We see it every day. The sharing of pleadings and discovery and briefs. The sharing of experience. The sharing of successes and failures.  The only thing you need to do in return is provide help when others ask for it. That’s how NCAJ works. This is our community – it’s the community we have created for ourselves. We help each other. We take care of each other. We need to lift each other up. And that has never been more evident than in the way we have collectively supported each other through this pandemic.”*

Q: You have quoted NBA star Draymond Green as saying: “Greatness doesn’t happen by mistake.” What does that quote mean to you?

A: “Greatness is about never being satisfied and never thinking you’ve learned everything. Research is developing like never before on psychology, imprinting, cognitive biases and decision-making, and we’re incorporating that research into our practices. We are developing new litigation and trial techniques, which years ago would have been considered crazy. We adapt. We learn. And we keep working toward greatness. We have a tremendous group of lawyers in NCAJ, including an incredibly talented group of rising stars, and I cannot wait to see what they accomplish, especially as we launch our NCAJ NEXT leadership program this year.”*

Q: Looking back over your career, what advice would you give to young lawyers?

A: “Be yourself. The mistake I made early as a lawyer was that I thought I had to be exactly like my heroes. I tried to impersonate them. I would take their speech, their mannerisms and their style into the courtroom. I came across as somebody not being himself. You have so much fear as a younger lawyer; you don’t want to make mistakes. But you don’t want to lose your genuineness and credibility. So now I’m at the point in my practice where I am comfortable with who I am, and that’s allowed me to be more human in the courtroom.”**

*Excerpted from his speech at the NCAJ June 2021 Virtual Convention

**Excerpted from an interview in Attorney at Law Magazine 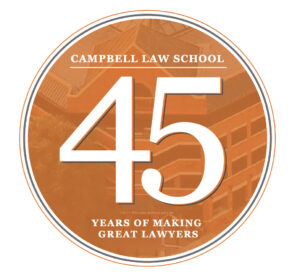