Second-year student Corey Goss and third-year students Kacie Campbell, Diane Ford and Camille Wrotenbery were coached by Jacob Morse ’17 in the NCTC. Morse was awarded Best Advocate at the NCTC finals in 2016 and is the 2017 Top Gun Champion.

The Greene Broillet & Wheeler NCTC, which  is hosted by Loyola Law School, is a national invitational tournament featuring 16 of the best advocacy programs in the country. To receive an invitation to NCTC, law schools must demonstrate excellence in mock trial competitions and a commitment to training law students in litigation. NCTC was founded with the purpose of providing law students an opportunity to develop and display the skills of an accomplished civil litigator. Student advocates must perform opening statements, direct- and cross-examinations of expert and lay witnesses, closing arguments and adeptly argue objections based on the Federal Rules of Evidence.

“For almost 20 years, Susan Poehls and Loyola-LA School of Law have hosted an elite civil trial competition among premiere advocacy schools across the nation and one of which I have had the pleasure of competing in,” explained Director of Competitive Advocacy Tatiana Terry ’19. “Every competition is well-run and challenging for law students. Campbell Law is proud to be competing among the very best in the nation,” 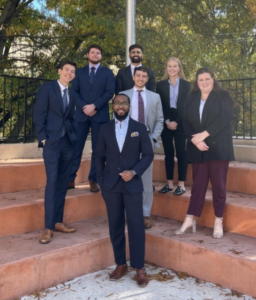 In 2021, Campbell Law advocates Tom Harvey ’21 and Michael Logan ’21 brought home the ABA Regional Negotiation Championship. The ABA Negotiation Competition is designed to promote interest among law students in legal negotiation, while providing a forum to improve negotiating skills through simulations of a series of legal problems. Each team consists of two JD candidates attending the same ABA-approved law school negotiating on behalf of their client to resolve a dispute.

“For our newly developed Negotiations Team, this was the first time each of the students competed in the law school advocacy world,” Terry said. “We are proud of their representation of Campbell Law and look forward to the opportunities they will have in the future.”