Before competing over the weekend, the teams worked diligently and submitted appellate briefs to the competition graders, the coaches said. In the National Moot Court Competition, the briefs represent 40% of each team’s final score during each round. The National Moot Court Competition is co-sponsored by the New York City Bar Association and the American College of Trial Lawyers. This competition is one of the longest-running and honored moot court competitions of its kind. Each year, more than 120 law schools compete in this competition beginning with regional rounds in November.

After the preliminary rounds, Campbell Law’s two teams advanced to the Top 8 as quarterfinalists.

“Brandon, Abby, Lauren, and Justin handled each oral argument with grace,” said Professor Tatiana Terry, director of Competitive Advocacy. “They were prepared and polished, representing Campbell Law as some of the very best advocates in the competition. Please join me in congratulating these outstanding student advocates for their success, dedication, and hard work in representing Campbell Law.” 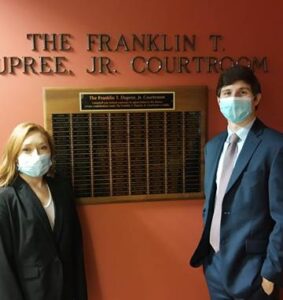