A second-year Campbell Law student has been invited to compete in the Farm Bureau Ag Innovation Challenge, a “Shark Tank”-style entrepreneurship competition for agriculture-related startups, on Thursday, Jan. 16, in Austin, Texas.

Along with the four other founding members of the engineering firm Innovative Agricultural Technologies LLC (IAT), Matthew Parker ’21  invented, designed and built the “Pine Bine,” the first machine to efficiently remove sticks and pine cones from longleaf pine straw.  The “cleanliness” of pine straw, which refers to the lack of sticks, pine cones and other trash in the straw, is one of the most important factors in determining the value of pine straw for landscaping use.  Without the Pine Bine, cleaning pine straw by hand is the most labor-intensive step in pine straw production, Parker said. 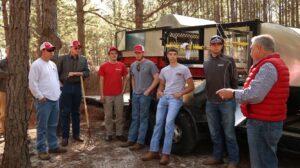 The IAT team placed ahead of more than 120 other entries to be declared one of 10 semifinalists in the Farm Bureau Ag Innovation Challenge, a national entrepreneurship competition that is open to all U.S. food and agriculture startups.  The American Farm Bureau Federation (AFBF), in partnership with Farm Credit, awards $145,000 in startup funds to entrepreneurs who compete throughout the year, culminating at a live pitch competition at the AFBF Annual Convention. The live pitch competition will be judged by professionals across the agricultural industry as well as academia, including professors from both Cornell and Texas A&M universities.  Startup funds for the Ag Innovation Challenge are provided by sponsors including Bayer Crop Science, Country Financial, Farm Bureau Bank, Farm Bureau Financial Services, Farm Credit and John Deere.

In addition to the live pitch portion of the competition, IAT will also compete for the People’s Choice Award.  To vote for IAT for the People’s Choice Award, download the “Farm Bureau Events” app from the App store and enter your vote between 8 a.m. on Saturday, Jan. 18, and 8 p.m. on Sunday, Jan. 19.  For more information, follow the IAT on Facebook  or visit www.PineBine.com.

Baling pine straw for landscaping use is at least a $250 million industry across the Southeast, according to Parker, and the industry has traditionally relied entirely on hand labor.  Explaining the importance of pine straw, Parker, who has a background in engineering and soil science from N.C. State University, notes, “Pine straw is important for landscaping because it shields the soil surrounding plants and their root systems from the sun, and it holds in moisture to promote plant growth. It also lasts a long time, is more cost effective than hardwood mulch alternatives, and provides a natural appearance to any garden. Pine straw is really nature’s mulch, but nobody wants gardens, yards and golf courses that are littered with sticks and pine cones.”

Parker along with Ben Cauthen, Alex Greeson, Ben Cranfill and Will Marsh designed the Pine Bine to address labor problems plaguing the historically under-mechanized pine straw industry during a capstone senior design project at N.C. State University in 2018.  By graduation, the team had developed a patent-pending machine.  Parker predicts that, once it is widely adopted in the industry, the Pine Bine could cut the labor costs associated with pine straw production by up to 80% and increase the number of harvestable acres of longleaf pine straw, not just in North Carolina, but also across the entire southeastern United States.

In 2018, the Innovative Agricultural Technologies team won first place in the AGCO student design competition at the American Society of Biological and Agricultural Engineers (ASABE) Annual International Meeting in Detroit, establishing the Pine Bine as the best agriculture-related senior design project in the United States that year.

While deciding on a project for their senior design course, the team saw a need and an opportunity in the pine straw industry.  Pine straw, a big part of the landscaping industry, is hindered by an insufficient labor force, according to Parker.

“One big problem in that industry is that labor is hard to come by,” he explained. “It’s hard to find people who want to go into the woods and separate sticks and pine cones from pine straw to get the best quality straw. Pine straw producers are barred from hiring H-2A ‘temporary agricultural workers’ because, under current law, harvesting pine straw is not considered an agricultural activity.  This unfortunate gap in federal law means that pine straw farmers may only lawfully hire H-2B workers, which caps the migrant labor pool at 66,000 people per year to be divided up by every single industry in the United States.  This statutory cap limits the labor pool significantly and effectively cripples the industry.  Because too few American citizens are willing to work long, hot days raking, cleaning and baling pine straw by hand, thousands of acres of longleaf pine trees are going unharvested every year in North Carolina.”

Then came the Pine Bine.

“The Pine Bine is the first-ever machine to actually be successful at removing sticks and pine cones from pine straw,” Parker said.  “And we designed and built it as senior engineering students at N.C. State in Raleigh, with a lot of advice and financial support from the North Carolina Pine Needle Producers Association.”

Shortly after graduation from N.C. State, the team formed Innovative Agricultural Technologies LLC and partnered with a small-scale rural equipment manufacturer in North Carolina.  The team plans to release the Pine Bine to the general public in the next several months.  Parker explains that Innovative Agricultural Technologies’ overarching goal is that the Pine Bine will “revolutionize the pine straw industry and make raising longleaf pine trees profitable again.”

Importantly, the Pine Bine also has the potential to yield environmental benefits in addition to increased profits for pine straw producers and landowners, Parker explained.

“Because of their unique growth habits, longleaf pine trees create an ecosystem found nowhere else on earth,” he said. “However, loblolly pines, which do not produce the same ecological benefits as longleaf pines, have largely overtaken the lumber market throughout the southeast because loblolly pines grow at twice the rate of longleaf pines.  If successful, the Pine Bine is positioned to help reverse this centuries-old trend of declining longleaf pine acreage throughout the southeast simply by doing its part to harness market forces rather than resorting to cumbersome regulation.  People will naturally want to protect longleaf pine ecosystems once it becomes more profitable to do so.”

For more information about Innovative Agricultural Technologies, the Pine Bine or the Farm Bureau Ag Innovation Challenge, contact Parker at (910) 639-8115 or Customer-Support@pinebine.com.

The first prototype of the Pine Bine is ready for a day of work in a pine plantation.