On Saturday, February 22, one of our members had a personal matter and couldn’t attend. She was one of our feature performers and even ended the show. Sophomore Psychology major, Ashley Haller came in and learned the whole show on the spot to prevent the team from being at a disadvantage. CVP A competed in prelim competition against 8 other guards and placed second with a score of 78.44. The guard was less than one point away from first place. This score helped move them up to finals. 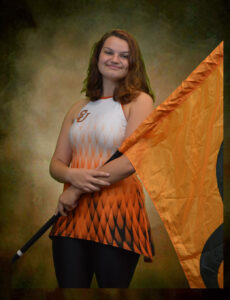 Haller shared some quotes on her experience;“It was a lot of helping each other while the staff worked with one group. If [the staff] was focused on the dancers in one section, everyone else immediately started working on something or helped someone else.” They endured the long trip to New Jersey and fortunately had a lot of fun listening to music and sharing snacks while sharing stories of their past winterguard experiences. Ashley continued to say “they were so welcoming and loving. Exactly what a guard should be like.”

Sunday, February 23 was the finals competition that was held. There were four other guards in the same class as CVP A. Two were from Pennsylvania, one from New York and one from Valleyfield, Quebec, Canada. Campbell University presents Carolina Visual Productions placed first in finals with a score of 78.350!

After the WGI weekend, CVP A ranked 5th in the nation but the season was cut short due to COVID-19.