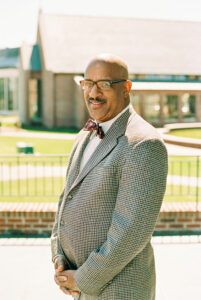 Henry has served Macedonia Missionary Baptist Church in Wilmington since 1988. A native of Ivanhoe, NC, he received his Bachelor of Arts in Religion from the International Seminary in Plymouth, Florida. He continued his education and earned a Master of Arts in Christian Education from Campbell University’s Divinity School in 2005.

When Henry first came to Campbell Divinity, he was recovering from bone cancer and chose a school that wasn’t too far from home. He remembers students taking the time to help him up Taylor Hall’s flight of stairs while he used a cane to get around. After completing most of his Bachelor’s degree on-line, Campbell Divinity offered exactly what Henry was looking for – small class sizes, personalized tracks, and one-on-one teaching in a traditional campus.

After Henry graduated from Campbell, at the recommendation of one of his professors, Dr. Timothy Brock, he decided to expand his theological education at Gordon-Conwell Theological Seminary in South Hamilton, MA. He graduated with a Doctor of Ministry Degree with a concentration in preaching. His dissertation, “Preaching from the Study to the Pulpit: How to Preach Sermons Rooted and Grounded in the Biblical Text,” is a guide that helps pastors start the process of preparing a sermon.

Henry’s dissertation was a labor of love. “I had my first preaching class with Dr. Jerry Wallace [at Campbell University Divinity School]. After that, I took every preaching class they offered. I had found my passion,” he says. “Even though I had already been preaching, it was the first time I learned the theory behind how to exegete scripture. When I saw that Gordon-Conwell had a preaching track in the Doctor of Ministry degree, I had to go.”

The congregation of Macedonia Missionary Baptist was behind Henry’s pursuit of theological education from the beginning. After 30 years of serving there, Henry says that the more time he spends with his congregation, the better their relationship gets.

“When I first arrived, they treated me like a son rather than a leader,” he says. “Only after we built relationships did they begin to see me as a pastor. I often say to young ministers that I mentor that you must build fellowship first; respect comes later.”

On top of ministering to his congregation, Henry is the former moderator of the Middle District Baptist Association, once the youngest moderator to serve the association in the history of the district. Until recently, he served as a Chaplain Associate at New Hanover Regional Medical Center in Wilmington. Now, he interviews and preps students coming out of the academic setting and moving into residencies at New Hanover. Drawing from his own chaplain experience, Henry says the number one thing he looks for in new residents is a caring spirit.

“It takes a special minister to render pastoral care,” he says. “Anyone can prepare a sermon but you really have to have that caregiving nature to do pastoral care. Even in tough times as they transition from life to death, if you’re there holding their hand, it’s a joy when you know that they’re a believer and that you can be part of what we call a ministry of presence.”

Henry has led many pilgrimages in and out of the country. He has led four pilgrimages to Israel to retrace the footsteps of Jesus, and three trips to Africa. He has traveled to Greece to study Paul’s ministry there, and to Germany, Prague, and Switzerland with Campbell Divinity School’s former Professor of Preaching, Dr. Roy De Brand to study Martin Luther and the Reformation. To Henry, being able to put places and images with the scripture he preaches and the church history he has studied is a tremendous gift. Over the course of his journeys to Israel, Henry has baptized 262 people in the Jordan River and plans to go again in 2020.

In 2014, Henry was chosen by the Lott Carey Pastoral Excellence Team to teach and preach in Zimbabwe at the Zimbabwe Baptist Seminary. Following his work in Zimbabwe, he returned to Africa to serve as the commencement speaker for the 2016 graduation class at the Liberia Baptist Theological Seminary. When the students invited him to return to speak in their classes, the Seminary appointed him to serve as their seventh president. Today, he travels to the school in Paynesville, Liberia once a quarter and connects with the students virtually every day.

“I am told I’m the first president to go out into the yard and spend time with the students, but I absolutely love it,” he says. “Having lunch with them, sitting under a huge tree in the middle of campus, I get to hear about their struggles in their context and how I can help and just listen.”

Being a seminary president brings fundraising challenges and a responsibility to maintain accreditation. One of Henry’s first priorities is keeping the balance between time with his wife, his son and daughter, and his congregation and the school entrusted to his care. Before accepting the role as president, Henry took the matter to his church congregation to get their unanimous approval.

“I’m very organized and have a great staff. I could not do it without them,” Henry says. “They pray with me before I leave, they pray while I’m absent and they anticipate my return. The blessing of it all has been to have a church family that is so supportive of my efforts. They know that I have teaching at my heart. It’s wonderful.”

Henry’s family’s support of his ministry in Liberia has helped him realize his passion for teaching. His wife Jacqueline’s career as a flight attendant has made his international travel easy, and his daughter says he has a gift for making things simple with stories and analogies. When his time as president of Liberia Baptist Theological Seminary comes to an end, Henry looks forward to his next calling.

“I really don’t know where my ministry is going. I know that God uses everything we’ve been through to propel us forward. I know it’s going to be leading some institution and I feel comfort in that.”