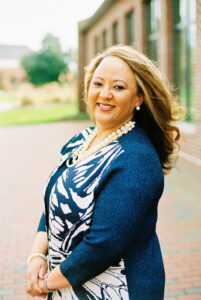 Her husband often tells people that his wife isn’t bi-vocational — she’s tri-vocational. But according to LaTonya McIver Penny, “quad-vocational” is probably more accurate.

The senior pastor of New Mount Zion Missionary Baptist Church in Roxboro, North Carolina, Penny is the executive director of Family Abuse Services of Alamance County and the leader of a non-profit called Mary’s Grace, which advocates for the respectful and compassionate treatment of children with disabilities. She’s also a mother of twelve-year old twins. And in May, she graduated from Campbell University Divinity School with her Doctor of Ministry degree.

Penny is a native of Leasburg, North Carolina and grew up in the Missionary Baptist Church. Her family was in the pews every Sunday, and her foundation in faith inspired her to pursue a career where she could make a difference. She earned her Bachelor of Arts degree in Communications to work in journalism.

“I thought I wanted to be the next Oprah,” Penny laughs. “But I hated it. As an intern, all I could see were the important stories that were being missed. I constantly thought, ‘why am I not covering the stories that matter?’”

After falling back on her business minor and working for her father’s competition in the construction industry, Penny felt called to do more. Most of her family, including her mother, worked in education. Her uncle, a pastor and educator, counseled her to try her hand at teaching. So she earned her Master of Arts in Teaching from East Carolina University.

While she loved teaching, Penny says she still felt trapped by curriculum restrictions when she wanted to be teaching holistically. But at the time, preaching and being a minister seemed off-limits.

“When I told my uncle I might want to preach, he told me I was probably being called to teach instead. At the time, I didn’t know that most men didn’t affirm women in ministry, and even within my own family I wasn’t affirmed. I became a teacher thinking he wouldn’t steer me the wrong way, but I couldn’t fit into the box.”

Penny began to pray earnestly for God to show her what her career would be. To her surprise, her uncle, who had since passed away, began appearing in her dreams, giving advice to someone preaching in a pulpit just out of Penny’s view. After a month of the recurring dream, Penny saw that she was the one in the pulpit and her uncle had been coaching her. She immediately talked to her pastor and learned that he’d been praying for her to accept the call to preach.

She began working on her Master of Divinity Degree at Wake Forest University School of Divinity in Winston-Salem, North Carolina, where she was introduced to countless female ministry leaders and pastors. Now as the first female elected pastor of her 117-year-old church, Penny told Baptist News that the pushback has been limited.

“The more I love and teach them, the more they have come to embrace it…In the community, nothing has ever been said to me, but it has happened to members of my congregation. Usually, a male speaking to another male, saying it’s against the Bible and ‘Y’all are going to hell.’ My people will say, ‘Show me where she can’t be a preacher.’”

While Penny didn’t see official positive inclusion in her church growing up, she did see strong female leadership in her grandmother, Mary. A faithful church member, Mary taught her family that regardless of someone’s health or abilities, they needed the care and love of Christ.

“It was a ministry to her,” says Penny. “She took people to doctor’s appointments and she babysat kids that nobody else would babysit. She’d cook for her entire family and then cook another meal to take to someone who couldn’t cook for themselves. She was such a nurturing, loving soul — that’s why I named my nonprofit Mary’s Grace.”

Mary’s Grace specializes in helping churches make accommodations for all kinds of children. Penny and her staff of ten teach church leaders how to work with differently abled children, how to adapt curriculum for various ability levels and how to accommodate people with sensory processing disorder. They strive to implement changes that help those in need and are universally convenient to the congregation.

Penny’s master’s in education has helped her identify and respond to those with special needs, and when she isn’t teaching, preaching or working her fulltime job, she is speaking at youth groups about being inclusive. Her husband Chas, a minister himself, also teaches, and her mother and best friend assist with their counseling and nursing backgrounds. From its namesake to its staff, Mary’s Grace is truly a family business.

Balancing Mary’s Grace with her pastoral duties, Family Abuse Services and schooling made Penny’s time at Campbell Divinity challenging. Penny chose Campbell because she liked the intimacy of the program cohort system and the ability to create a program that would be individualized to her passions. She credits her faculty mentor, Dr. Alicia Myers, with encouraging her to trust the process and finish on time even when it felt impossibly overwhelming.

“I doubted myself frequently. I felt like I wasn’t going to be able to handle everything on my plate. I had to give up some preaching engagements, how many friends I’d get to visit, what conferences to go to and what volunteer opportunities to turn down.”

Upon graduation, Penny says that she will finally be done with higher education. Her doctoral work, titled “One of the Four: A Woman is Called for Radical Inclusion for Those Who Are Differently Abled in the Black Church” perfectly combines her life experience and her two master’s degrees. It has given her the credentials people are looking for in a nonprofit like Mary’s Grace, and given her expertise in working with marginalized communities.

“I want Mary’s Grace to be a common name in North Carolina and even throughout the country. If a church needs to figure out how to work with a particular population or a particular person, if any community is struggling to make accommodations, I pray that they’ll call Mary’s Grace.”