Kinsley Weaver is one of our smallest Camels, but she has one of North Carolina’s biggest hearts for America.

Kinsley, a five-year-old from Raleigh and the daughter of Campbell alumna, Lindsay Weaver (‘10), has already fostered a deep love and respect for the American flag. Every time she spots a flag, the “pint-sized Patriot” will point it out to those around her, place her hand over her heart, and say the Pledge of Allegiance.

Her family first noticed Kinsley’s dedicated attention to the flag a year ago, when she learned to say the Pledge in preschool every morning. That routine continued as she pointed out flags through the car window on her way to school. Lindsay said, “She would say the Pledge, followed by a patriotic song she also learned at preschool – ‘Red, white, and blue. Red, white and blue. My flag and your flag is red, white, and blue.’” This little ritual soon turned into games of “I Spy” as the Weavers encouraged their daughter’s patriotism. No matter if the Weavers are on a road trip, at the store, or even just watching television, Kinsley is on the lookout for more flags.

Lindsay recalls one particular time when the family noticed Kinsley’s dedication to the flag, saying, “We were in a crowded mall and Kinsley saw a flag hanging up from the ceiling. She stopped walking and stood still, putting her hand over her heart while she recited the Pledge of Allegiance. Even with a train passing by in the background, Kinsley kept her eye on the flag – showing respect.” She also remembered an instance where a flag was shown on television during a sporting event and Kinsley immediately pointed it out and said the Pledge.

The Weavers have actively embraced and encouraged their daughter’s patriotism. Lindsay said, “We have told her that the flag is to be honored and [is] a symbol of freedom. Although we are not a military family, we are very grateful to those who have served and fought for our freedom.” The family also acknowledges that Kinsley has helped raise their awareness of flag’s role. “She has reminded us, her parents, to show respect to the flag and not just pass by it,” Lindsay added. “Our five-year-old has opened our eyes.”

As for Kinsley, she would like to thank the military for “fighting the bad guys and protecting us.” 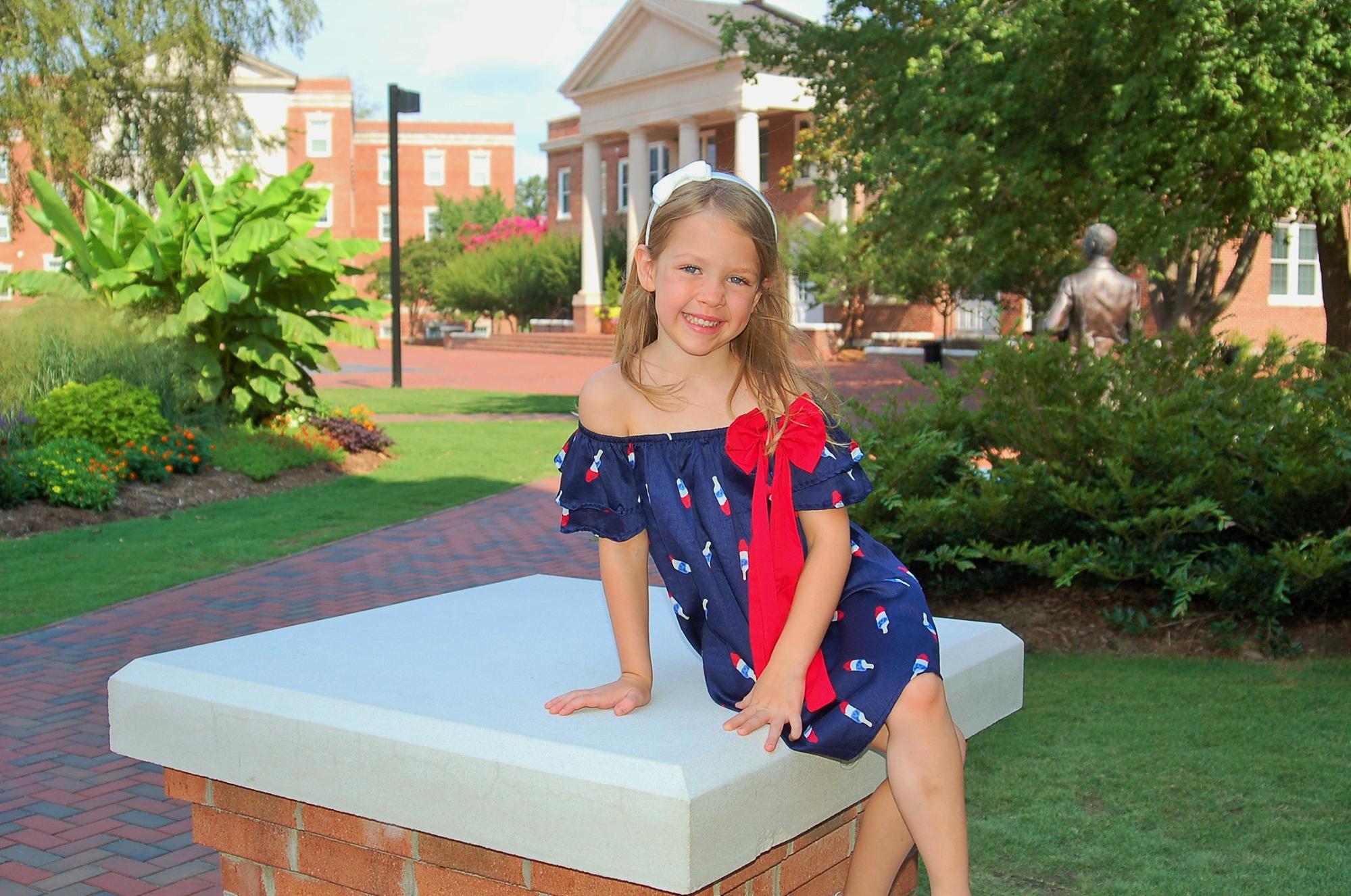 Although she is always trying to spot a new American flag, Kinsley also enjoys performing on stage, much like a typical five-year-old girl. She recently danced in a ballet recital, and her favorite part about dancing is “twirling.” When she’s not dancing or looking for flags, she enjoys playing the role of big sister to Paityn Weaver, “always teaching her how to do something,” Lindsay said.

The Weaver family still enjoys participating in the Campbell community. Lindsey was on the cheerleading team while attending Campbell University, and then became the assistant cheerleading coach, where she continued “to help grow the program for the next four years.” The family still attends Campbell events as often as they can.

Kinsley’s story has garnered significant attention, even granting her family an interview with WRAL. This Independence Day, learn a lesson from Kinsley and take a moment to remember the significance of the American flag.