Carroll Leggett, ’63 and Buies Creek native is a guest writer for the Campbell Alumni Blog. Carroll also serves on the Alumni Board of Directors. 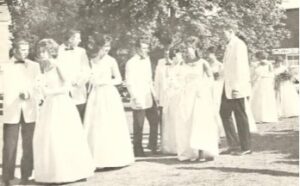 For years it was Campbell’s most popular “town and gown” event. Buies Creek was very much a working village then and everyone put on their Sunday best and made their way to “The Circle” in front of D. Rich to celebrate the rites of spring and crown a May King and Queen. Two local preschoolers were chosen as “crown bearers,” and young mothers waged quiet campaigns to have their darlings selected for the honor.

Pictures of the “May Court” took up pages and pages in the yearbook.

It is easy to understand why.  The coeds were stunning in their gowns –not a yard of crinoline left in the county – and the guys wore dinner jackets and black ties.  The handsome couples were chosen by their classmates.  Each residence hall had a representative and the competition was heated. Day students somehow were included because I managed to make the Court.

Frances Lloyd, a member of the athletic staff and granddaughter of Campbell founder, Dr. J. A. Campbell, choreographed the annual event. Classical music ruled the day and a record player assisted by two huge loudspeakers provided the music for the processional, the dances and the much-anticipated winding of the Maypole, and the recessional. A few scratches on the long-plays were forgiven.  So, too, was an occasional interruption as the scruffy campus mutt was chased out of the cordoned circular performance area.

The program was simple.  The King and Queen, followed by crown bearers and then the court, processed in to the strains of Tchaikovsky, while Dvorak, Grieg and others were saved for later. Parents beamed, classmates applauded, and townspeople reveled in the occasion and the predictably grand May Day weather – thanks to many Baptist prayers the night before.

The dais had its back to D. Rich and was a sprawling trellised affair decorated with ivy. When the principals were all seated, including the King and Queen with crown bearers at their feet, the celebration of the return of spring became with a mixture of narration, now lost, music and dancing.  The piece de resistance, of course, was the winding of the Maypole – a rather artless exercise that required little more than  crossing over and under with colored ribbons and reversing, then repeating several times.

Simple, yes.  But it often resulted in entanglements that left grace to imagination, spectators in stiches, and the symmetry of the wound Maypole destroyed.

May Day supposedly originated in ancient Greek and Roman cultures, and no one knows when the celebration began at Campbell, or, for that matter, when it ended – not even Frances Lloyd who still lives in Buies Creek.  But she did rummage through some old pictures and came up with a few for us.  “They are rather amateurish,” she said apologetically.  Not to worry.  Thanks for the memory! 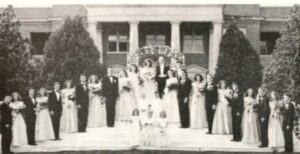 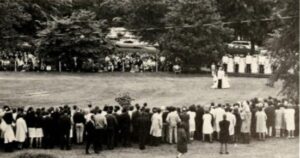