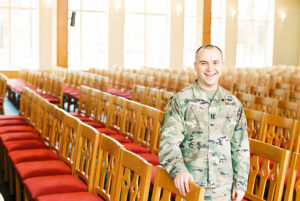 When Gabriel Garcia left for his first combat deployment in December 2013, northern Afghanistan was freezing cold. In the middle of a hurried trip back home from the showers, which were yards away from his separate sleeping quarters, Garcia’s foot slipped. He paused and said a few admittedly unholy words when he heard a still, small voice telling him to take off his shoes because he was on holy ground.

“I thought I was crazy,” Garcia remembers. “What am I listening to? Holy ground? In Afghanistan?” The words reminded him of a Bible verse when God speaks to Moses for the first time, telling him to take off his shoes. “I think God was trying to guide me to that scripture and remind me to look up and realize that I was on holy ground, even in Afghanistan in the middle of a war zone.”

Before his experience on deployment, Garcia says it had been a while since he considered the voice of God. He grew up in a Spanish Southern Baptist church in Miami, Florida, the first generation of his Cuban family to be born and raised in the U.S. He probably heard God’s conversation with Moses in his church’s contemporary youth group for first and second generation Hispanic students. The group, and Garcia’s family, supported his decision to look at Bible colleges right out of high school. Ultimately, his father’s military career influenced Garcia the most. Garcia joined ROTC while earning an associate degree, graduated from Florida International University with a bachelor’s degree and was commissioned to Fort Bragg. His goal was still to become a chaplain, but first he wanted experience so that he could better empathize with and help soldiers in moments of crisis.

It was when his unit was stationed in South Korea that Garcia says he began to lean away from God. During his first year there, the only time he prayed was during his weekly Skype call with his parents on Sunday nights, when it was Sunday morning back home.

“I know those prayers worked because I could have gotten in a lot more trouble than I did,” he laughs. “I was a Christmas-and-Easter-only Christian, and I felt hypocritical when Saturday night I was at the bars and Sunday morning I was in church. Going out was how we relaxed. It was stressful being at a major base during a tense time and knowing that Korea could go from peacetime to wartime so quickly.” 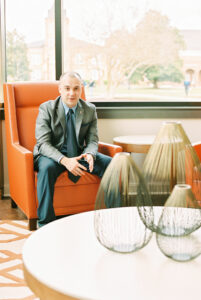 The turnaround to Afghanistan after returning from Korea was quick and Garcia’s unit was busy preparing for deployment. But once he was there, the reminder of God’s presence, even in Afghanistan, snowballed into a total renewal of faith for Garcia. He started reading the calling of Moses, David, Saul and Samuel, continued to other Old Testament leaders, and then moved on to the disciples of the New Testament.

“God started moving in my heart again. Reading the Bible was what sparked the calling to chaplaincy,” he says. “I just kept running into chaplains and when I asked what their calling experience was like, they all told me the same thing — it’s a desire that’s not going to go away until you fulfill it.”

Garcia’s talks with chaplains motivated him to start his master’s degree online. He quickly realized that becoming a chaplain and working full-time in the Army would be a long, slow process. He switched to the Army Reserves and had begun looking into divinity schools when a Campbell student from his hometown of Miami recommended Campbell University Divinity School, only a short drive from Fort Bragg.

“I came here and went to the prayer tower to ask God that His will be done — and it was. That’s why the tower is such a special place to me,” he says. “My tour finished right before the weather turned, and I got a taste of my first snow day here at Campbell. I just knew this was the place.”

Garcia’s favorite thing about Campbell Divinity is the relationships he’s built with students and professors on all paths of life. At Campbell Divinity, classes are filled with individuals called to a wide variety of ministries. Some are working to become pastors, chaplains, or missionaries; others are in more nontraditional settings studying to learn how to incorporate their faith into their careers. For Garcia, that career will be in chaplaincy and counseling in the military and veteran community.

“I have learned so much from Campbell Divinity, particularly about pastoral care from Dr. Mac Wallace,” Garcia says. “I can’t tell you how many times I’ve been working and thought, ‘Oh, this is what Dr. Wallace was talking about.’ It’s being the least anxious presence in a room — not worrying too much about what you say, but just being there, especially in the moment of crisis.”

Garcia served as a resident chaplain in Murray Hall and completed a chaplain internship at the Durham VA Medical Center before starting a part-time chaplaincy at First Health in Moore County, where he works with a mix of civilian and veteran patients. In October, he will start a year of full-time residency at the Asheville VA Medical Center.