Campbell has always been committed to meeting the needs of active duty and veteran military students in order to build a brighter future in the civilian and military worlds. In addition to extended military campuses at Fort Bragg and Camp Lejeune, Campbell possesses one of the best ROTC programs in the nation.

The College of Pharmacy & Health Sciences has graduated a number of military students who have gone on to lead successful careers all over the world.

An Army scholarship brought retired Army Col. Jorge Carrillo (’00 PharmD) to Campbell in 1999 to complete a post-baccalaureate PharmD. Prior to his arrival at Campbell, Carrillo worked as an army pharmacist for seven years while stationed in Ft. Stewart, Georgia; Panama City, Panama; and Ft. Hood, Texas. After completing his PharmD, he continued his army career serving in various leadership positions at the U.S. Army Medical Command, The Joint Commission, U.S. Army Public Health Command, and the Department of Defense (DoD), Defense Health Agency. Carrillo returned to North Carolina in 2015 and served as the Department of Pharmacy Director at Womack Army Medical Center before retiring in October 2018 after 26 years of service. Carrillo now lives in Fuquay-Varina, North Carolina and works for Biologics by McKesson in Cary, North Carolina, as a senior director overseeing specialty pharmacy operations. He also serves on the CPHS Pharmacy Advisory Council.

Major Jamie Longmire (’13 PharmD) was commissioned through the Health Professions Scholarship Program during her first year of pharmacy school. Longmire currently serves at Joint Base Elmendorf in Richardson, Alaska, as the Chief of Inpatient Pharmacy. She admits that school was tough and advises incoming professional students to bloom where they are planted. CPHS helped expand Longmire’s knowledge base, therefore instilling personal and professional confidence. 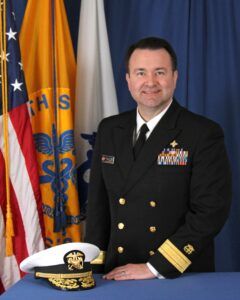 Rear Admiral (RADM) and Assistant Surgeon General Brandon L. Taylor (’98 PharmD) serves as chief of staff for the Indian Health Service as part of the U.S. Public Health Service Commissioned Corps. RADM Taylor has served in multiple leadership positions during his career. He shared what an honor it was to be selected as an Assistant Surgeon General, as only 1% of the USPHS Commissioned Corps are able to serve in this rank. He recently came back to campus and provided the professional address at the 2019 White Coat Ceremony.

As a recipient of the Air Force Pharmacy Health Professions Scholarship, Major Rick Smith (’10 PharmD, MSCR, MBA) knew that his military commitment would require a service pay back of two years. It has been nine years since Smith graduated from Campbell, and he is still serving his country and improving the quality of healthcare. Smith serves as the Pharmacy Flight Commander at Ehrling Bergquist Clinic. As an alumni with multiple degrees, Smith shared how his MBA has been beneficial in his current position. He manages a $12 million dollar budget and oversees the pharmaceutical services for 50,000 Department of Defense) beneficiaries.

Major Ryan Shaver (’12 PharmD) was introduced to his military options during his P1 year. He shared that the offer was, “too good to give up.” Shaver currently serves as the Chief of Clinical Pharmacy at Joint Base Elmendorf. He is in charge of the pharmacy’s clinical services as well as overseeing all other prescribing pharmacists. He is grateful to CPHS for supplying real-world experiences and practical knowledge. Clinical encounters provide hands on experiences and allows students to piece together academic and real world scenarios, better preparing them for practice.

The military looks favorably on strong leadership qualities, and the College of Pharmacy & Health Sciences provides a learning experience that extends beyond the classroom. In addition to academic endeavors and clinical encounters, students experience spiritual, mental and emotional growth. Personal development helps prepare students for a variety of career paths. Carrillo shared, “Campbell gave me the confidence and expertise to handle the most challenging tasks one can imagine as a pharmacy leader.”

Healthcare providers strive to make a difference in the lives of their patients and communities. Many Campbell students and alumni answer an additional call and put their education and skills to use in service to the military. CPHS alumni are well prepared to serve as leaders in the United States military, and we are grateful for their many sacrifices!